A 40-year-old public limited company, located in Mahad MIDC, Maharashtra, is one of the manufacturers of acetaldehyde and ethyl acetate. The unit generated two streams of different characteristics. One stream has high COD, low TDS levels whereas the second stream has low COD, high TDS levels. This varied characteristic of effluent created a challenge to operate the wastewater treatment plant to full efficiency. Also, the foaming was a major issue faced while operating the plant. The biological unit used to frequently get upset which resulted in exceeding pollution parameters in the outlet treated water.

Organica Biotech Pvt. Ltd. performed a bacteriological study called “Biocheck Analysis” on the effluent from the aeration tank. This analysis helps to understand and determine the health of the biological unit of the plant. The result of the analysis indicated the presence of filamentous organisms. The dense presence of the filamentous organisms affected the settling characteristics which resulted in sludge bulking.

Based on the results of the analysis, a two-month bioremediation program was prepared and implemented.

CleanMaxx is a unique proprietary formulation that consists of a consortium of different strains of microbes that help in the effective reduction of wastewater parameters. These microbes secrete enzymes and are effective under a wide range of temperatures, handles very high TDS and shock load. Microbes in Cleanmaxx are natural and safe. This technology is the result of extensive research and development of the last 20 years.

A treatment of 60 days was suggested by our bioremediation experts. Dosing was planned and the pre assimilation method was used during the dosing of Cleanmaxx. A log sheet was prepared to analyze and maintained an optimum balance of the F/M ratio. MLSS was developed under strict observation of Organica Biotech’s representatives and the company’s personnel. An MLSS level of 2500 – 3000 ppm was developed within two weeks. The parameters of inlet and outlet were kept under check. Regular site visits were done by our personnel to make sure about the controlled conditions. 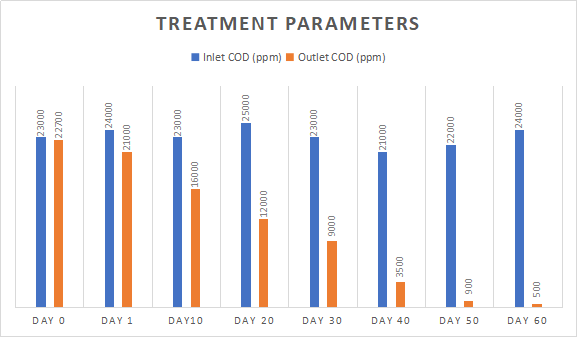 On implementation of suggested bioremediation program in the biological unit, an average of 95%– 97% reduction in the level of COD/BOD was achieved. The MLSS was developed to 3500 Mg/L. The clarity in the outlet water improved. The foaming in the plant reduced drastically. The industry was benefitted due to stabilized plant operation and within-the-limit outlet parameters. A portion of the outlet water is being reused for gardening and washing purpose. The wastewater treatment plant has been functioning effectively ever since.