Food processing industries generate a lot of wastewater due to the continuous washing and cleaning involved in the food processing lifecycle. Meat processing units, especially, use a large volume of water for in-house operations and release a substantial part of the total volume as effluent into their wastewater treatment plant.

Our clients also have a meat processing unit in east India which was plagued by many of the issues affecting similar businesses. They were unable to meet discharge norms set by the state Pollution Control Board. The COD of their effluent was in the range of 20,000-25,000 ppm at the inlet and 8000-10,000 ppm at the outlet. Persistently high COD, odour in the effluent and high levels of ammoniacal nitrogen were the most pressing issues on hand when they approached us for help.

At first, we assessed the plant and observed that the effluent was rich in organic matter like blood, oil and grease, urine, wash water, etc. The quality and quantity of wastewater varies from season to season and also depends on the number of animals slaughtered. This subsequently increases the level of suspended solids in the effluent. As the wastewater comprises of highly putrescible components, it emanated foul odour, which was making work unbearable for the staff working in the facility. Further, the high COD level at the outlet was a clear indicator that the cow dung being used in their biological system was inefficient in solving complex effluent treatment issues.

After a detailed analysis of their biological system, our technical experts recommended a bio-augmentation programme, combining Cleanmaxx and Cleanmaxx ANB.

Cleanmaxx is a consortium of beneficial, non-genetically engineered microbes that is proven to handle major challenges in wastewater treatment. The product is a unique blend of microbes and active enzymes which act synergistically to lower pollution load in effluent. Cleanmaxx effectively reduces undesirable organic load, like COD, BOD, ammoniacal nitrogen, oil and grease from effluent, thus improving wastewater quality. We recommended Cleanmaxx to primarily resolve the issues with COD and ammoniacal nitrogen levels.

To address different wastewater concerns, our R&D team has developed many variants of Cleanmaxx. One such customised formulation is Cleanmaxx ANB, specifically designed for anaerobic treatment systems. Cleanmaxx ANB has the potential to maximally reduce odour from effluent, and also helps in sludge reduction. We believed Cleanmaxx ANB would be best suited to mitigate odour issues in the effluent at our client’s plant.

And the results bore out our recommendations. 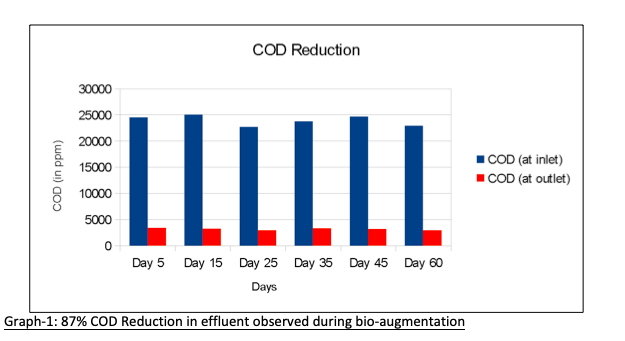 Soon after addition of Cleanmaxx, our implementation team observed a drastic reduction in COD levels. Where they were initially achieving a reduction of 55-60% using cow dung, our advanced microbial formulation helped to fetch a reduction efficiency of 85-87%. The microbial consortium in Cleanmaxx feeds on the organic matter present in effluent, thereby considerably reducing COD. Unlike other microbes, our robust microbes can grow and multiply in all types of shock loads, which makes it easier for them to reduce the organic load. The COD was further reduced as per the discharge limits by tertiary treatment systems.

Our treatment also resulted in a 91% reduction in ammoniacal reduction levels. Blood, urine and faeces are the major sources of ammoniacal nitrogen in meat processing effluent. Initially, the ammoniacal nitrogen level at outlet was in the range of 70-100 ppm. During the bio-augmentation programme, Cleanmaxx brought this down to 8-9 ppm.

Odour was gradually removed and completely eliminated by the end of the bio-augmentation programme. Odour in effluent is mainly due to the formation of H2S gas during biodegradation. Cleanmaxx ANB comprises of specialized microbial strains, with different metabolic pathways, ensuring no odour generation during the degradation process.

Sludge generation in effluent is due to partially degraded or even undegraded organic matter and inactive or dead biomass. The microbial consortium present in our solution grows and multiplies actively, thus working on actively reducing sludge generation.

In conclusion, we achieved 85-87% COD reduction combined with 91% reduction in ammoniacal nitrogen and completely eliminated odour at our client’s plant, helping them improve their wastewater quality and meet discharge norms set by the state Pollution Control Board.

Please use the form below to contact us for help with any wastewater quality or effluent treatment issues you’re facing and we will come back to you with a solution derived from nature and backed by science.