The Secret Sauce Of Effluent Management

The Secret Sauce Of Effluent Management

One of India’s leading pharmaceutical companies, a global presence in branded generics reached out to us with a problem – the functioning of their ETP (Effluent Treatment Plant) was disturbed as a result of increased hydraulic load, and they wanted us to help it function efficiently.

Our experts discovered that they had been consistently adding new product lines over the past five years.  Over time, not only had effluent volume increased from 8-10 cubic metres a day to 15 cubic metres a day, its characteristics had become far more intense as well.

As a result, the existing microflora was unable to cope with the shock-load.

We formulated a treatment plan to address the challenges with the ETP facility without the need for any structural modifications. The first step involved a Biocheck analysis to understand the health of the biological system by analysing samples in our DSIR approved R&D lab.

With data from the report, we were able to give the client all the information they needed about the physical characteristics and condition of the existing microflora.

Our experts decided that a bio-augmentation program in line with the Pollution Control Board (PCB) norms would be the right path to maintaining the fluctuating biomass level while reducing refractory organic pollutants. We recommended CleanMaxx, our consortium of encapsulated microorganisms with an increased shelf life that degrades refractory organics even under stringent conditions.

The two-month long program introduced Cleanmaxx in small doses, via pre-assimilation. The re-circulation rate was increased to facilitate the heavy growth of microorganisms. By maintaining an optimum DO (dissolved oxygen) level of 1.8 – 2.5 ppm and regulated minimal nutrient doses, we developed an MLSS level of 2500 to 3800 ppm within two weeks of the program.

The results following treatment were immediate and impactful.

Results
COD Reduction efficiency increased to a 75-90% range as compared to 50 – 60% before the implementation of the bio-augmentation program.

A significant MLSS level was developed during the two-month treatment, and after one year the MLSS levels were maintained at desired levels despite a high TDS load. There was also a significant reduction in the TDS level due to organic waste reduction.

In conclusion, with CleanMaxx microbial technology, there were significant improvements to the performance of the biological system including
1. Rapid MLSS development within 15 days
2. COD reduction efficiency increased from 60% to 90%
3. Desired MLSS was maintained even under high TDS load
4. Overall stabilisation of the biological system was achieved 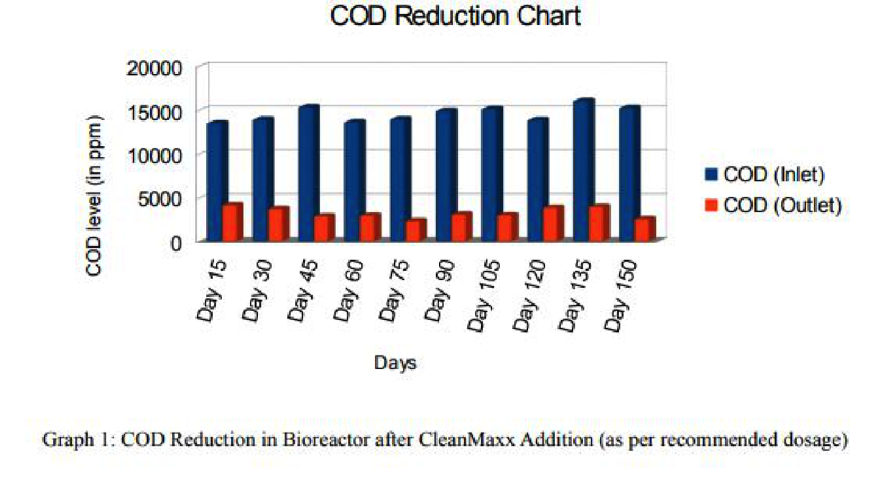 The company was able to achieve the effluent discharge limits as per PCB norms after advanced tertiary treatment. Our client was thrilled with the results, and we were only too happy to identify and solve their problem effectively.

Learn more about CleanMaxx and how we can help you deal with any issue affecting your effluent treatment plant.