This line of defence is the primary Defence Organisation of India. One of the five Central Armed Police Forces of the Union of India, it was raised in the wake of the 1965 War on 1 December 1965, “for ensuring the security of India and for matters connected there with”. The organization has grown exponentially from a few battalions in 1965, to 186 battalions with a sanctioned strength of 257,363 personnel including an expanding air wing, marine wing, artillery regiments, and commando units.

With such a huge organization comes the responsibility of maintaining services required to complete mundane tasks. In these were raised a few small yet alarming concerns regarding sanitation that could directly or indirectly affect the health of officers.

Defence Campus face sanitation issues as the usage of toilets is high. The heavy usage of toilet facilities leads to loaded septic tanks that ultimately results in overflow that hampers the aesthetic value of the environment and may cause ecological and sanitation problems. Many of the problems arising with septic tank systems are due to the lack of consideration given to the disposal of tank effluents. Effluents inside the septic tank is anoxic and hence they likely contain large numbers of pathogens that is a possible source of infection. Moreover, more suspended solids are discharged with the effluent. The incomplete degradation of these solids lead to the generation of H2S which subsequently causes odour problems. 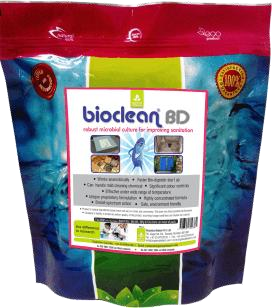 This is where our microbial culture “Bioclean BD” is a cut above any other. It comprises of a consortium of beneficial bacteria that can have a sustainable impact on the septic tank. It is an Accredited Microbial Culture by the ‘Ministry of Drinking Water and Sanitation, Government of India’ and has proved its efficacy in an array of environmental conditions and has also performed in sub zero temperatures to degrade faecal matter quickly. Our micro-encapsulated bacteria ensures an increased shelf life. We have proposed our inoculate in various other defence organizations where it has worked wonderfully well. The implementation of Bioclean BD is technically easy, feasible and is easy to maintain.

After the conduction of dosing at the respective sites, the analysis report of the septic tank samples
before and after analysis is as follows:

The Raw Samples and the treated samples were tested. The Laboratory is a complete test house for testing of environment, drugs, pharmaceuticals & food samples. It is an ISO 9001:2015 Certified & BS OHSAS 18001:2007 Certified Laboratory. Test result sample of Raw and treated sample are as follows:

Also read: How Poor Sanitation Situation In Ghana Is a Major Cause For Concern