Background: Lack of accessThe vicinity of Madhuban Toyota harbours one of the most congested regions of BMC L ward. Children and women constitute a major percentage of the local residents living in this area. Poor sanitation facilities and lack of community toilets have propelled the inhabitants of this to engage in open defecation. This led to spread of diseases among children.

Key Issues
a) There was no community toilet in the vicinity
b) Several children engaged in open defecation. This led to propagation of several diseases
c) The area is highly congested with heavy traffic flow. This put the children at an increased risk.
d) Open defecation spoilt the aesthetic appeal of the region

Bioclean Biodigestor: A realistic solution for ending Open Defecation!
Bioclean toilets provide a super structure. These provide an enclosure to people and inhibit the spread of
diseases and pathogens. These are portable and can be maneuvered easily. These inhibit the infestation with pests.

Bioclean Biotoilet quintessentially comprises of three units
The first compartment is for separating solids and liquid and also holds billions of superior microbes, for degradation of organic pollutants.
The second and third compartment degrades organic matter further and separates biomass from treated water.
The compartmentalization ensures that the bacteria have sufficient time to degrade the waste completely.

Results observed
Organica Biotech has installed 4 Bioclean Biotoilets in the vicinity of Madhuban Toyota.
The following results were observed: 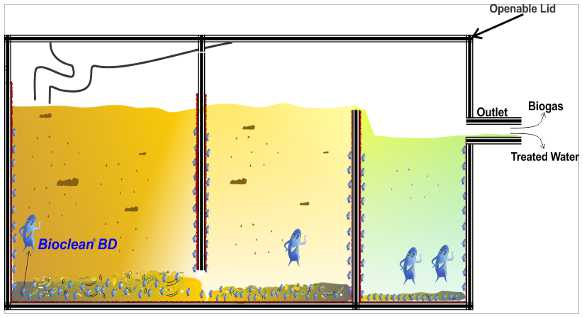