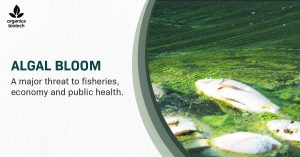 Phytoplankton is an essential constituent of the marine food chain and comprises 40% of the total fixed global primary productivity. Out of 5,000 species of marine phytoplankton in the world, 7% are responsible for algal blooms, including diatoms, dinoflagellates, raphidophytes, prymnesiophytes and silicoflagellates. Out of 7% algal bloom, 2% of phytoplankton species are toxic, and dinoflagellates contribute 75%. The occurrence of blooms is spontaneous; their growth and persistence are a combination of physical, chemical and biological factors interacting in unpredictable ways.

Let us understand Algal Bloom better. But before we do that, let’s know algae as an organism better.

Algae are entities that are present all over the world. They may live alone or may grow on other organisms’ surfaces or rocks or in the soil. These species are essential as they make oxygen on Earth necessary for all living beings. Most of the algae species are found in seawater or freshwater. They can withstand an extensive range of temperatures and absorb light energy through photosynthesis and turn inorganic substances with the absorbed energy into simple sugars.

Apart from being an essential source of oxygen and food, they are an indicator of pollution. Algae in large quantities can inhibit the surrounding plant’s growth and cause algal bloom.

What Is Algal Bloom?

Water discolouration is observed when there is a rapid increase in the algal population of freshwater or marine systems. This water change is identified as an algal bloom.

There are three major types of algal blooms:

They are formed due to the deposition of extra nutrients, like phosphates, found in fertilizers on agricultural land. The higher concentration of nutrients leads to algal bloom formation in fresh water.

This algal bloom is formed in large water reservoirs like the ocean. It leads to the depletion of ocean oxygen levels, affecting the marine ecosystem.

Have You Wondered What Could Be The Primary Causes Of These Algal Blooms?

Well, there are several factors to consider that might be responsible for causing algal bloom. Some of them are:

Runoff Nutrients
The presence of high levels of nitrogen and phosphorus in water can lead to algal blooms. These nutrients are usually washed away from lands and agricultural areas full of nitrogenous and phosphatic fertilizers. Rains are the intermeddling agent that flows away these nutrients into rivers and streams, and they end up in reservoirs like lakes and oceans.

High Temperature
We know how global warming affects the ozone layer, which could be one of the main reasons algal bloom is thriving faster. The exceedingly high temperature has led to rapid decompositions of nutrients like nitrates and ammonia, one of the more accessible forms for bacteria to use and grow in large quantities.

Presence of Dead Organic Matter
There are bacteria present in the ecosystem constantly in search of suitable media for growth and nutrition. Like these bacteria, our algae bacteria are facilitated by dead organisms in the water. The nutrients in the water, along with dead organic matter, propagate the growth of algae in water causing algal bloom.

Gradually Moving Water
Still waters are ideal for algal blooms to thrive. Most blue-green algae prefer water with low flows, long retention times, light winds and minimal turbulence. Their proliferation in these waters is less troubling, which explains their confined growth in fast-flowing streams and rivers.

After Understanding The Primary Causes Of Algal Bloom, Let’s Dive Deeper Into Their Effects On The Environment.

Apart from reducing oxygen levels in the waterbody, the algal bloom has many more effects on the ecosystem.

A threat to human health
The toxins produced by algal blooms make it unfit for consumption. When this contaminated water comes in contact with humans, it causes irritation, itching and fatal skin diseases.

A threat to aquatic life
Fishes and other aquatic life depend on water dissolved oxygen for survival. With an intense growth in algae, there is competition for oxygen, leading to an imbalance in the ecosystem.

Ocean dead zones
Nutrient pollution can create dead zones where there is no oxygen, and aquatic life cannot survive. These dead zones are known as hypoxia. They emit foul odours affecting the rest of the marine life and sending them far away from the area.

There are solutions to overcome this algal bloom and keep our marine ecosystem safe. One of the ways is to treat the sewage water properly. Eliminating components such as nitrogen and phosphorus and reducing the sludge volumes can help dump fewer nutrients into the water body. We at Organica Biotech have been providing cost-effective organic solutions to treat the wastewater well to avoid mishaps.

Our solution Bioclean Pond Clarifier contains a natural microbial formulation created for effective bioremediation of ponds. It helps to reduce the excessive load of nutrients in the water. Our one-stop solution is ideal for maintaining the health of the lakes and ponds around you.

Now that you know about algal bloom wish to understand its effect on aquaculture? Check out our latest blog.